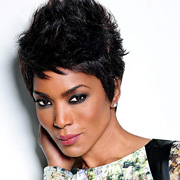 Angela Evelyn Bassett (born August 16, 1958) is an American actress and activist. She is best known for her biographical film roles, most notably her performance as Tina Turner in the biopic What's Love Got to Do with It (1993), for which she was nominated for the Academy Award for Best Actress and won a corresponding Golden Globe Award. Bassett has additionally portrayed Betty Shabazz in both Malcolm X (1992) and Panther (1995), Katherine Jackson in The Jacksons: An American Dream (1992), Rosa Parks in The Rosa Parks Story (2002), Voletta Wallace in Notorious (2009) and Coretta Scott King in Betty & Coretta (2013). Bassett's performance as Parks was honored with her first Primetime Emmy Award nomination.

Bassett began her film career in the mid-1980s, after earning a bachelor of arts degree from Yale University and a master of fine arts degree from drama school. In the 1990s, she appeared in films nearly every year. The 2000s saw a succession of films starring Bassett, with her appearing in at least one film every year. Bassett's success has continued into the 2010s. Bassett earned nominations for her roles in films such as The Score (2001), Akeelah and the Bee (2006), Meet the Browns (2008) and Jumping the Broom (2011) and won awards for her performances in How Stella Got Her Groove Back (1998) and Music of the Heart (1999) among others.

In 2013, she had a recurring role on the FX horror series American Horror Story: Coven, earning her second Primetime Emmy Award nomination for her performance as Voodoo queen Marie Laveau. She returned for Freak Show, the anthology series' fourth season, portraying a three-breasted woman named Desiree Dupree for which she received another nomination for Outstanding Supporting Actress in a Miniseries or a Movie. In 2015, Bassett returned for the fifth season Hotel portraying Ramona Royale, a famous movie star. In 2016, Bassett returned to the series's sixth cycle, Roanoke, portraying an alcoholic actress named Monet Tumusiime, who plays struggling mother and former police officer Lee Harris in the My Roanoke Nightmare documentary.